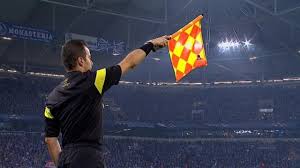 Several offside decisions were discussed at a recent training camp and PRO has received clarification from FIFA.

We discussed a number of offside decisions at our recent preseason camp with active practitioners, experienced ARs Paul Scott and Craig Lowry, conducting the session.

Lively debate in discussion groups was followed by clear guidance on seven of the nine controversial clips that were discussed.

The session was of vital importance to the manner in which offside is going to be interpreted by PRO during the forthcoming season.

It is also of paramount importance that PRO is consistent in its approach, alongside FIFA, CONCACAF and US Soccer, who all had representatives in attendance, namely Craig himself and Alfred Kleinaitis, one of PRO’s senior assessors, as well as Sonia Denoncourt, CONCACAF Director of Refereeing, and Hector Vergara who is a FIFA Instructor and a member of the FIFA Referees’ Committee.

It was good that everyone left the room with a clear message on seven of the clips. However, there were two that were unclear but PRO has now received clarification from FIFA. The two decisions in question are shown in the two videos below.

The part of law that is relevant to these decisions states:

‘Gaining an advantage by being in that position’ means playing a ball that rebounds, is deflected or is played to the player from a deliberate save by an opponent having been in an offside position

A player in an offside position receiving the ball from an opponent, who deliberately plays the ball (except from a deliberate save), is not considered to have gained an advantage.

Therefore the match officials have to decide whether the defender deliberately played the ball or whether it deflected or rebounded from him. The official verdict PRO received from FIFA was that these two cases are both deflections and, therefore, offside.

With regards to the other clips that were discussed, FIFA agreed with PRO on the following verdicts:

It must be noted that the three ‘offside’ verdict clips above were also correct under the law which stood in 2014. We cannot implement any changes to law mid-season as we have to be consistent for the whole year.

The only considerations we had last season according to the Laws of the Game were:

And FIFA has issued the following clarification:

Additional interpretation of ‘challenging an opponent for the ball’

This means in two of the above plays – New York Red Bulls v Chicago (3.25) and Chivas USA v Seattle Sounders (50.18) – the offside players have to be interpreted as ‘challenging an opponent for the ball’, as it is clear that their actions definitely ‘interfered with the opponent’, namely the goalkeepers.

In the New York Red Bulls v Toronto FC (70.45) case, the player is deliberately standing in an offside position prior to a free-kick to obstruct the goalkeeper’s line of vision.

Last season, PRO’s referees were applying law in a fair and diligent manner, considering whether the offside positioned player was actually obstructing the goalkeeper’s line of vision or not.

Now the mandate from FIFA is that if the player is deliberately standing in an offside position as a tactic, he will be declared offside. PRO agrees with this as it is a tactic to obstruct the goalkeeper’s line of vision, and so it should be penalized as offside.

PRO, FIFA, CONCACAF, US Soccer can now all move forward, operating a consistent interpretation to the offside law.